Who is Elwood Edwards? 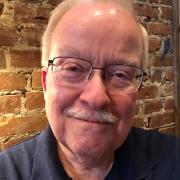 In 1989, Elwood Edwards was given the opportunity to be the voice of American Online’s innovative technology, which added a human-like voice to the online service provider’s computer software. Using a battery-operated cassette deck, he recorded the iconic “welcome,” “you’ve got mail,” “file’s done” and ‘goodbye” messages for AOL’s computer software — in just one take each!

Little did he or the rest of the world know, that his voice would become a pillar in pop culture history.

Edward’s recognizable voice will now be an official conversational AI voice for Marygold & Co’s new digital banking and financial services app. Edwards’ voice has evolved from being the voice of new dial-up internet technology to a transformative fintech solution helping shape the future of mobile banking. It’s only fitting that the man who brought us into the recognizable computerized voice-over world is now one of the first conversational AI voices in mobile banking. Elwood is thrilled to lend his vocal talent to Marygold & Co to help innovate the future of mobile banking.

Get ready to hear “You’ve got money!” in that familiar voice when receiving money from a Marygold & Co. client. Join our waitlist now for a special invitation to open a free account with Marygold & Co. and see what all the buzz is about.