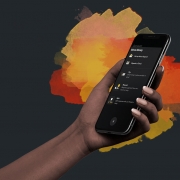 “Welcome.” If you grew up in the internet age, you undoubtedly recognize the iconic AOL catchphrase, “you’ve got mail!”

AOL, one of the industry’s early pioneers, initially provided dial-up service to millions of Americans. Originally known as America Online, the online service provider grew to become one of the most recognized brands on the web by the early 2000s, providing a web portal and later a web browser, as well as email and instant messaging services. But even if you weren’t a legacy AOL user, you’re still likely to be familiar with the celebrated slogan.

But now, thanks to the Marygold & Co. banking and financial services solution, a new generation of internet users can familiarize themselves with the voice behind the well-known pop culture reference, Elwood Edwards.

Our innovative fintech app employs Edwards’ ultra-recognizable vocal talent to notify users when they receive a payment: “You’ve got money!” The app’s exclusive tools — combining mobile banking, real-time payments, and goal-oriented “Money Pool” savings and investment accounts with automated funding options — empower users with a digital alternative to traditional banking. The mobile application will also include other greetings from Edwards like “you got paid,” “you’ve reached your goal” or “you’ve sent money” to help users better manage their finances anytime, anywhere, with no banking fees, no minimums and no credit checks.

When we first approached Edwards with the opportunity to be featured on our unique app, which introduces conversational AI to the banking and financial services sector, he saw being the voice of the future of banking as “an exciting opportunity.” Like having a private banker on your phone offering personalized banking and financial services, the Marygold & Co. app enables users to legitimately take control of their money.

From Email to the Future of Banking

Q: How did you get started with AOL?

A: “My wife, Karen was a customer service rep at Quantum Computer Services, which is the company that became AOL. She overheard Steve Case, one of AOL’s founders and the company’s former CEO and chairman, talking with some programmers about adding a voice to the software, so she volunteered me.

I sat in my living room with a battery-operated cassette deck and recorded the ‘welcome,’ ‘you’ve got mail,’ ‘file’s done’ and ‘goodbye’ messages in just one take each. She took the tape to work with her, the software engineers digitized it into the software — and here we are.”

Q: How much did AOL pay you?

Q: Do you still get residuals from that work?

A: “No, I don’t think anybody had any idea it would become what it did.”

Q: Has AOL ever contacted you again?

A: “Yes, they flew Karen (my wife) and me to New York for the East Coast premiere of the ‘You’ve Got Mail’ movie. I got to see Tom Hanks from 150 feet away and the back of Meg Ryan’s head when she was getting in her limo.”

Q: What made you want to do voice-over work in the first place?

A: “I started in radio when I was in high school as a DJ on the Elmo show. The day after high school graduation is when I started working in TV as a booth announcer, a film projectionist and a staff announcer. By now, I have done so many commercial and promotional announcements at various TV stations that I’m quite used to hearing my voice. It’s not a surprise to me.”

Q: What was your favorite part of working with AOL and serving as the iconic “you’ve got mail” voice?

A: “I guess the recognition of everybody who grew up — especially during that time — recognizing my voice even today. I truly enjoy the recognition and appreciation. That, to me, is a very satisfying part of this whole adventure.”

Q: What is it about your voice or the AOL greetings that you think made the AOL user interface so memorable?

A: “I think it was a first-time exposure for most people to that kind of interaction with a computer.”

Q: Have you done any other recognizable voice-over work?

A: “I was the voice of a virtual doctor on an episode of ‘The Simpsons’ in which Lisa, the little sister, was trying to convince Bart and Homer that they were very sick. When Bart and Homer say to the program, ‘help me, virtual doc. You’re my only hope,’ a figure appears on the screen, and you hear my voice say, ‘you’ve got leprosy. Goodbye.’”

Q: How do you envision or define “the future of banking”?

A: “Today, all of my interaction with my bank is through my iPhone. Banking, I think, will be positively affected by what’s happening with the Marygold & Co. solution — and not just because my voice is on it. I believe the Marygold solution is going to quickly become a system with great ease of operation, something that is far easier to use than the banking app for my own bank.”

Beyond the ease of use, Edwards’ favorite aspect of the Marygold & Co. solution is the traditional debit card that provides access to FDIC-insured accounts.

“The fact that it still uses a plastic card — something that everyone identifies with — to make any necessary transaction very easy, in my opinion, was my favorite part,” Edwards continued. “(The contactless debit card) certainly was not a barrier for me.”

The contactless Mastercard debit card can be used nationwide across a network of 37,000 surcharge-free MoneyPass ATMs and anywhere Mastercard is accepted worldwide. Additional Marygold & Co. features include:

As increased demand for a digital banking experience from millennials and Gen Zers continues to transform how the entire banking industry operates, Edwards is “100% very, very excited” about evolving from being the voice of a new technology, like dial-up internet, to being the voice of an innovative fintech solution helping shape the future of banking.